Mike Lunsford & I recently  took a walk on the bluff-top west of Refugio State Park, enjoying a beautiful morning. Mike was a founder and long-time President of the Conservancy and as a career State Park ranger on the Gaviota Coast, knows the terrain well.

Mike and his family lived in a doublewide trailer for a number of years on this bluff top about a quarter mile west of Refugio Beach. When we reached the building site of his former home, it was no longer there. It wasn’t a mystery; that section of the 100-foot-tall bluff  had simple fallen into the ocean. Mike estimated that about 60 feet of the bluff that supported a deck, the doublewide and a single lane access road, had collapsed into the sea since he and his family had moved into the trailer in 1979. That’s an average of about 1 ½ feet per year. Pretty dynamic for something we think is terra firma.

In the cove at Refugio State Park the palm trees bear additional witness to coastal erosion from storms and climate change. The trees were planted about 1928 and developed into an iconic, some would say exotic, landscape. Early photos of the palms show them planted in alluvial soil adjacent, but removed from the water and sand https://goletahistory.com/the-refugio-palms/.

Today those palms are being swamped by climate change with their toes engulfed in sand and sea water. 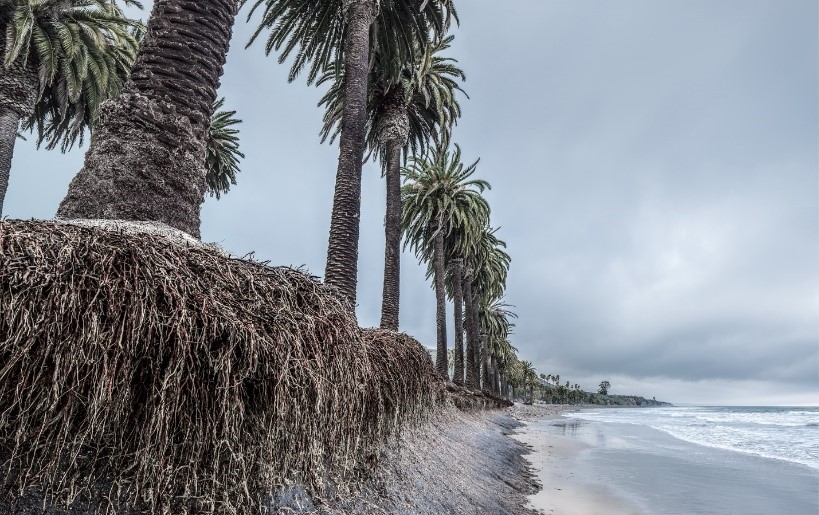 The exposed root balls of the trees, higher than my head, were once completely anchored in soil. Palm tree trunks and roots are incredibly fibrous, but the soil that nurtures them is porous, eroding easily given the power of storm surges riding on a rising ocean.

The end result are palms adrift.

Many thanks to Reeve Woolpert, photographer extraordinaire, who has documented the Gaviota Coast and provided the Conservancy with his images, knowledge, and good cheer for many years. Reeve tells me that the original government survey of the West Coast of the United States was begun in 1850 near Point Conception, a logical place to start measuring the breadth of this land.

A brief introduction to benchmarks can be found at https://en.wikipedia.org/wiki/Survey_marker