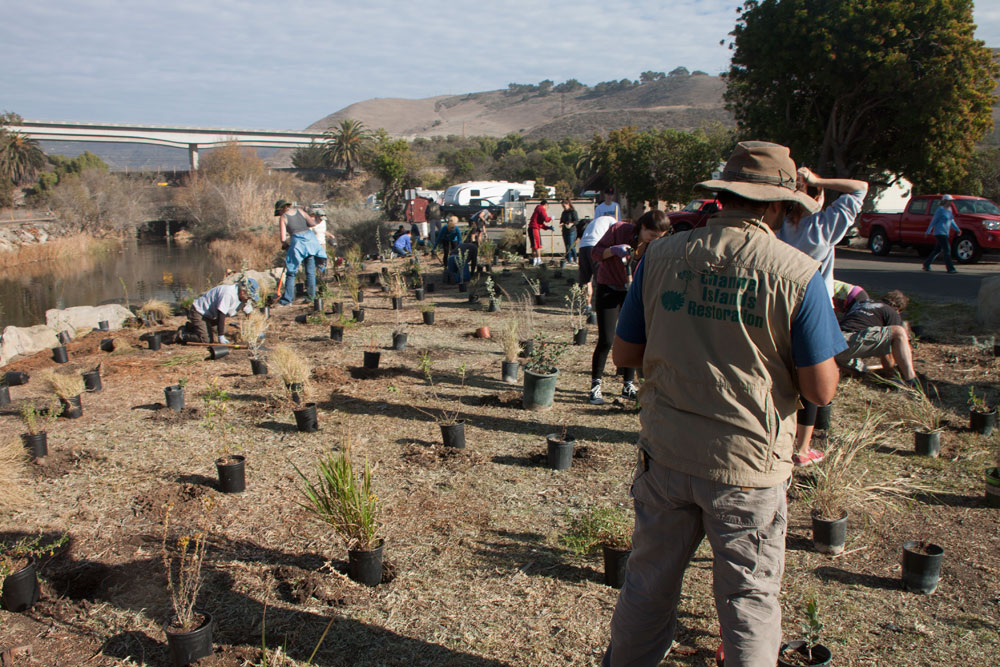 Not long after we started our work on the Channel Islands, we were approached by land managers and local government to work on mainland projects.  Starting as early as 2003, CIR worked with the Land Trust of Santa Barbara County to remove priority invasive plants at the Arroyo Hondo Preserve. The Land Trust had already begun a vigorous volunteer program to remove weeds (several CIR founders participated in that effort) but CIR also worked under contract to remove some of the most tenacious invasives in what were often difficult to access areas of the Preserve. These projects were not suited for volunteers and required CIR staff with special expertise to complete successfully. Over the years CIR has worked to remove almost a dozen invasive plant species in several locations on the Preserve, all while carefully preserving the endangered species that live in the creek.

In 2007 the Land Trust hired CIR to remove large stands of giant reed (Arundo donax) from the Refugio Creek watershed.  The Arundo, which reached 30 feet in height in most places, choked large areas of the lower three miles of the creek.  CIR used hand-crews and equipment to cut and haul out the Arundo, and then planted more than 3,000 native plants with the help of volunteers.  Bank stabilization techniques were used to prevent erosion while the native plants became established.  The removal process had to be done in such a way that the endangered steelhead trout and red-legged frogs living in the creek were not harmed in any way.  The removal of the Arundo and the planting of natives helped restore the creek to a more natural function, which directly benefits the animals that use the creek as their habitat.

In 2009 the Santa Barbara County Agricultural Commissioner’s office hired CIR to remove artichoke thistle (Cynara cardunculus) from the property just west of Arroyo Hondo.  Artichoke thistle is the wild variety of the common artichoke.  It spreads rapidly in rangeland and reduces forage, limiting the movement of livestock.  Since it is such a threat to rangeland, the Agricultural Commissioner has made its removal from the County a priority.

In 2013-2014 CIR partnered with South Coast Habitat Restoration (SCHR) to restore the lower portion of Refugio Creek at Refugio State Beach.  With funding from the Southern California Wetland Recovery project and with the help of California State Parks, dozens of invasive trees were removed from the creek banks. CIR removed invasive Kikuyu grass and Pampas grass, and we helped recruit and organize more than 150 volunteers to plant natives at the site.

CIR is proud and honored to be a part of the solution to restore portions of the Gaviota Coast.  This amazing but threatened natural resource is a true treasure deserving of everyone’s efforts to preserve it.