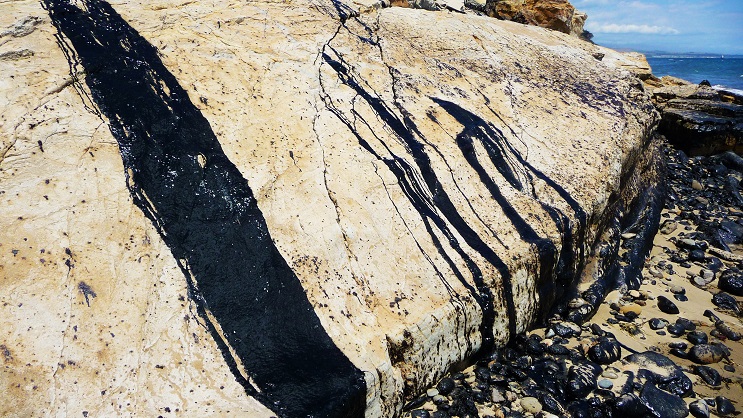 Update, May 23rd: Per this article in the Santa Barbara Independent, all Santa Barbara County oil production has been temporarily suspended:  http://www.independent.com/news/2015/may/23/refugio-pipeline-shutdown-puts-brakes-oil-producti/

Additional information may be found in this piece, also from the Independent: http://www.independent.com/news/2015/may/21/whos-watching-man-whos-watching-pipeline/

As this is written, about 100 hours have elapsed since the Refugio Oil Spill was first reported. At least some facts are now clear: 9 miles of the Gaviota Coast have been fouled by the major oil spill from a pipeline located just west of Refugio State Beach and on the north side of Highway 101. The pipeline ruptured late in the morning of May 19th, and somewhere between 21,000 gallons and 105,000 gallons of oil poured directly onto the beach into the ocean via a storm drain that leads under the highway.

We have several recent developments to report on: as discovered and initially reported on by Nick Welsh of the Santa Barbara Independent, the pipeline that broke is the only oil pipeline in Santa Barbara County not equipped with an automatic shutoff valve. This is the result of Plains All American Pipeline (PAAP) having successfully sued the County of Santa Barbara some two decades ago in an effort to shift regulatory oversight for the pipeline from the county to the federal level, which has less stringent pipeline safety standards. Second, and in a related story, the federal regulatory agency which oversees pipeline safety decreed on May 21 that the broken pipeline responsible for the Refugio Oil Spill be shut down immediately. The agency chose not to provide PAAP prior notice before requiring shutdown of the pipeline. Additionally, it now appears that PAAP staff were physically present at the site of the spill when the Santa Barbara County Fire Dept. responded to a call from a tourist indicating that she smelled oil in the air. Obviously, many questions remain: what was PAAP staff doing to prevent further spillage and contamination? Why did it take so long to shut down the pipeline in the middle of the day? What, precisely, caused a pipeline that had ostensibly been inspected only a few months prior to fail?

While the spill affected roughly nine miles of coast, the four-plus mile stretch of beach between Tajiguas (to the north) and Lorraine's (to the south) was the most heavily impacted section of coastline, and will require years to recover. Much of the exposed bedrock along this coast is now coated in a shiny black ooze of oil. There are reports of Snowy Plover colonies being forced from their nests because the beaches are simply covered in oil, and they are unable to feed. This reporter walked this length of coast on May 22, and within minutes found his eyes stinging and watering, and was coughing from benzene and other chemical fumes. While the negative impact of this spill on wildlife and on beaches to the north and south of Refugio remains unclear at this time, we have heard reports of significant amounts of oil appearing at Coal Oil Point (Devereux Point) and Campus Point. We will be monitoring of the full extent of the spill over the coming days and weeks. 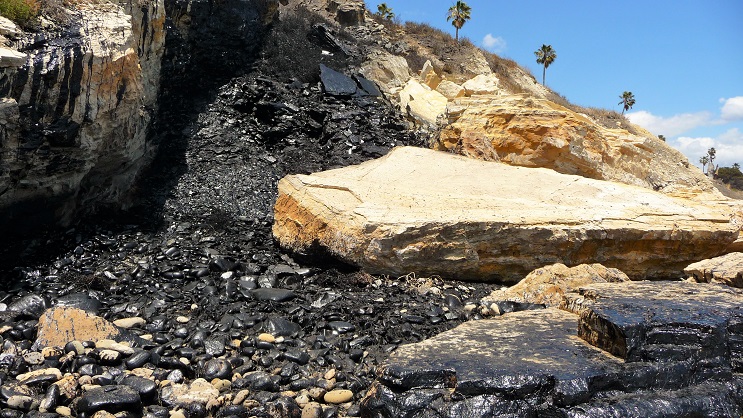 The clean up effort, underway since May 20, is headed by Patriot Oilfield Services of Long Beach,a contract company selected by PAAP, despite there being local firms that likely would have been able to initiate the clean up process more quickly. The clean up does seem to be gaining momentum; as of first light on the morning of Wednesday, May 20th, the entire effort appeared to consist of a pair of tugboats pulling a boom, a Coast Guard cutter assessing the damage from the water, and several small teams of individuals discussing the situation from various beaches. Also on Wednesday morning, an intrepid volunteer convinced a local hardware store to donate a number of orange 5 gallon buckets and trash bags, and while most of the formal agency response involved officials setting up their RVs at Refugio Campground, four volunteers on the beach shoveled oil into the buckets.  These early actions reduced the amount of oil that washed back out with the tide and would otherwise be drifting south towards the City of Santa Barbara today. By Friday, May 22nd, Tyvek-suited work crews were engaged in collecting globs of sandy oil from the beach, shoveling it into bags, and passing the bags hand-over-hand to a long line of waiting trucks for disposal. While it is heartening to see real effort being made, it is hard to not wonder whether at least some of the damage to our beaches could have been prevented, had the response been faster and better organized. 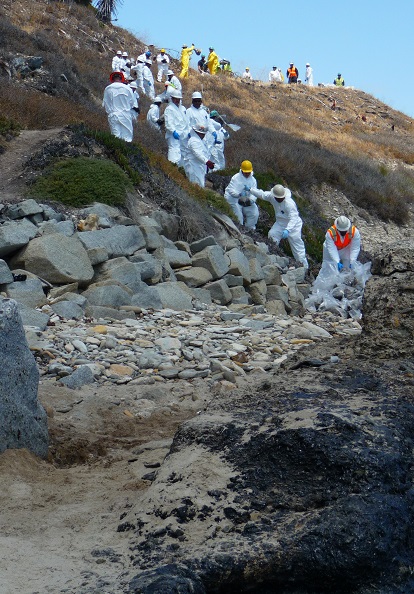 This absolutely inexcusable incident illustrates the crucial need for oversight of the oil industry, clear protocols regarding monitoring and and maintenance of equipment, and redundancy in safeguards. All of us interested in preserving the extraordinary place that is the Gaviota Coast should take a few moments to consider what we can do to help preserve this amazing locale in all of its beauty, and to ensure that accidents of this nature do not occur again.

Please consider donating or volunteering time to the local environmental organization of your choice, whether it is the Gaviota Coast Conservancy, the Save Naples Coalition, The Surfrider Foundation, Santa Barbara Channelkeepers, or the Environmental Defense Center. Each of us has something to contribute, and quite literally every bit helps.

As a reminder, local environmental groups are planning a "Stand in the Sand" rally for 12 noon on Sunday, May 31, on State Street in Santa Barbara. We will update this space with additional details as they become available. Those interested in volunteering with animals injured by oil can find information at calspillwatch.dfg.ca.gov.