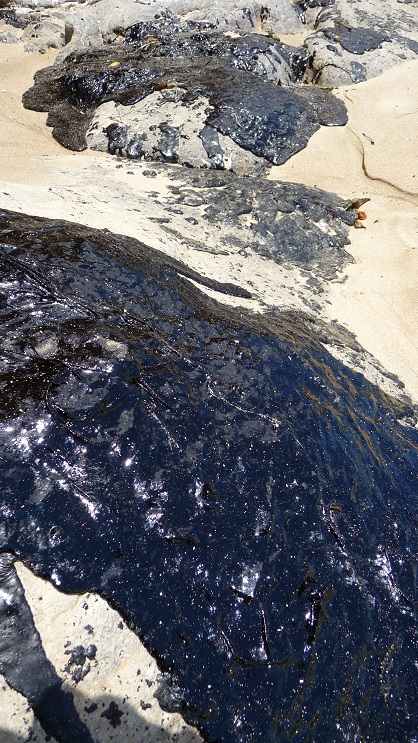 Update, May 29th: Upcoming events: On Saturday, May 30th, the Unified Command will be hosting an open house; this is an excellent opportunity to ask questions of the officials behind the cleanup effort. Marc Chytilo, counsel for The Gaviota Coast Conservancy, remarked, "The Gaviota Coast Conservancy calls on Plains All American Pipeline and the Unified Command to immediately commence cleaning up all beaches with any accumulated oil from Ventura to Hollister Ranch, and to sustain this effort through the summer and until all oil has been removed. The tardy initial response has caused these additional areas to be contaminated unnecessarily, and responders need to broaden the response area accordingly."

Also, we would like to remind an invite you to join us the Stand In The Sand Community rally on Sunday, May 31st. The rally will begin at 1p at De La Guera Plaza.

In other news, we have received an important open letter regarding potential health impacts from working to clean up our beaches in the aftermath of this terrible spill from our friends at the Louisiana Environmental Action Network (LEAN). LEAN was deeply involved in the cleanup of the Gulf Oil Spill, and also in ensuring that the oil industry was held full accountable after that unmitigated disaster: they have experience with spills, and their letter should should be required reading for anyone who is interested in volunteering to clean up the Gaviota Coast. It reads, in part:

"Anyone who tells you that these materials are safe and can be handled with minimal care is misrepresenting the facts. Even brief exposure to crude oil can irritate and damage skin, cause headaches, dizziness, nausea, confusion, difficulty breathing and other problems. Inhaling crude oil mist can cause chemical pneumonitis, a serious lung disease."

Please take a moment to read the entire letter, and please pass this on to anyone who may have been exposed to these chemicals, or who plans to contribute to the clean up effort.

On a related note, well-regarded local filmmaker Mark Manning has produced a very powerful short film which is highly recommended viewing for anyone who is concerned about the health of our beaches and coastline.

The Refugio Incident Unified Command has released a document indicating that if you or someone you know has been impacted by the spill, you may file a claim via telephone.

In a very encouraging development, and in another piece of fine reporting by the SB Independent, US Senators Boxer and Feinstein (both D-CA) and Senator Markey (D-MA) have begun an inquiry as to why the initial response to the spill was so slow.

Finally, the Unified Incident Command has updated their Refugio Oil Spill Map. For the record, and though the Unified map indicates that no oil is present in these areas, this reporter has personally seen unusually high amounts of oil and tar on the beaches to both the north and the south of Gaviota State Beach.

As always, we are truly grateful for your support, and we hope to see you on Sunday at Stand in the Sand!