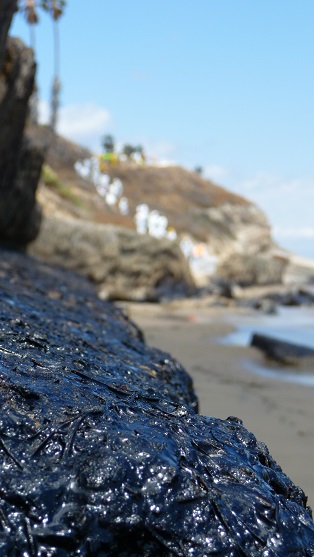 Update, May 26th: The SB County Board of Supervisors held its first public hearing on the Refugio Oil Spill today in Santa Maria, and the great majority of comments from the public favored greater oversight and regulation of the oil and gas industry in county and more and better legislation in terms of environmental protections.

As one speaker noted, "An ounce of prevention equals a pound of cure." To this point, the Refugio Oil Spill Joint Command released an update today, indicating that some 3,300 cubic yards of oiled material have been removed from the coast. While the spilled oil itself obviously has a negative impact on the environment, it is impossible to remove 3,300 cubic yards of oil-fouled soil, sand, and vegetation without negatively impacting our fragile coastal ecosystem. This is a clear reminder that the effects of the Refugio Oil Spill are wide-ranging, not yet wholly understood, and will be felt for years to come.

On a very positive note, Supervisors Janet Wolf, Doreen Farr, and Salud Carbajal all made clear their understanding that this oil spill constitutes an environmental disaster, and each expressed their intent to hold the oil industry fully accountable. Supervisors Peter Adam and Steve Lavagnino, however, repeatedly attempted to diminish the significance of the spill by comparing it to the oil seepage that occurs naturally. At one point, Lavagnino even stated that, because natural seepage amounts to 4000 gallons each week, "that is one of these spills every week"; given that the Refugio Oil Spill involved at least 21,000 gallons (and more likely 105,00-plus gallons) of oil, this comparison is clearly fallacious.

It is vitally important that we as citizens communicate our positions to our elected officials- this would an excellent time to take a few minutes to call or email your County Supervisor, and to let them know that we want to preserve a clean, oil-free Gaviota Coast, and that we want the oil industry in general- and Plains All American Pipeline, in particular- held fully accountable for this mess. Contact information for each of the SB County Supervisors may be found here.

An interesting development came to light today in a piece published by the SB Independent today: SB County District Attorney Joyce Dudley visited the spill area on Monday, May 25th, and declared it a "potential crime scene". As reported by the Independent, Dudley will be meeting with federal prosecutors this week to discuss the matter further.

As a reminder, private citizen volunteers who wish to help with the cleanup are now being accepted, but must undergo training first. Information and the training sign up sheet may be found here.

Please check back tomorrow for additional updates and information.

The Gaviota Coast Conservancy is a volunteer-based, non-profit organization, and we truly appreciate your support. Please consider making a donation of time or resources to the environmental organization of your choice: our beaches and oceans will thank you!