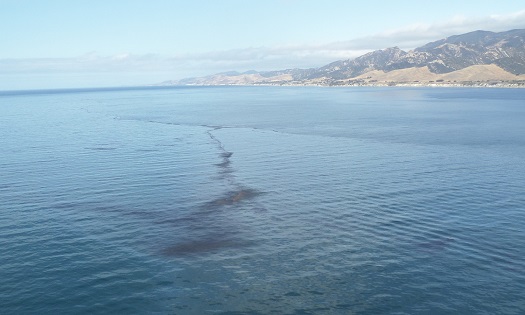 Update, May 28th: Stand In The Sand, the group formed in the wake of the 2010 Gulf Oil Spill, has organized a community rally for Sunday, May 31st at 1p at De la Guerra Plaza in downtown Santa Barbara to protest the black tide of oil on our beaches. We invite you to join us and other members of our local environmental community as we rally for oil-free beaches and clean energy! Our president, Phil McKenna, is on the rally's speaker lineup. Full details on Stand In The Sand are here.

As cleanup of the Refugio Oil Spill continues and the extent of coast affected by the spill increases as the oil is transported by wind and ocean currents, additional and far-reaching impacts of this ecological disaster are coming to light.

For example, we are now finding some of the threatened Snowy Plovers which nest at Coal Oil Point (Devereux Point) with oil on their wings and feet.

And, while the unified response team has not released an updated map of the spill area since May 26th, first-hand accounts as of May 28th indicate that higher-than-normal levels of oil are being seen on beaches from Hollister Ranch on the north to Carpinteria and beyond on the south.

Jerry Roberts, former editor of the Santa Barbara News-Press (current columnist for SB Independent and editor of CalBuzz.com), focused on the spill in this edition of his program City Desk on SBTV. Roberts also offers a high-level overview of the spill and its coverage by the media in this superb and thought-provoking piece.

Finally, Nick Welsh and the staff at the SB Independent published a piece in today's issue which offers a sobering historical context of the Refugio Oil Spill.

It is increasingly apparent that the effects of this tragic oil spill will be felt for years to come. Once again, we encourage everyone to take a moment to contact their Santa Barbara County Supervisor to let them know that we desire clean, safe, oil-free beaches, and for the oil industry to be held to the highest level of accountability with regards to safety, transparency, maintenance, and clean up.

We appreciate your support, and we hope to see you at Stand In The Sand this Sunday, May 31st, at 1pm!