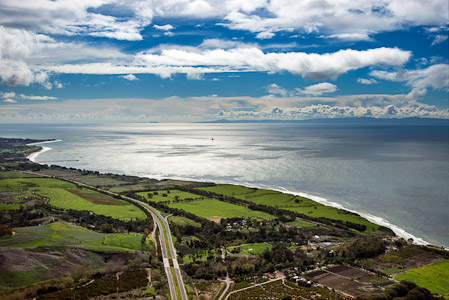 First Bank of Missouri sold Santa Barbara Ranch, aka Naples, to Standard Portfolios for $44.5 million. David Liu is the principal at Standard Portfolios, a real estate company with large apartment holdings that is reported by the Wall Street Journal to be funded by Chinese capital. Matt Osgood has reappeared to purportedly serve as the project developer; you will remember Mr. Osgood as the developer that secured the entitlements on the property in 2008 and subsequently defaulted on over $85M in loans in the Great Recession. First Bank spurned our offer to buy the property in 2010, and then rejected a market priced offer in 2014 by a “conservation developer” that we supported. We will continue to fight to preserve the rural character of this important property.

The County’s 2008 preliminary approval of a 72-lot development is still effective, but going stale, and must still be approved by the Coastal Commission. Mr. Osgood will appear before the Board of Supervisors in March seeking transfer of a 20-year development agreement from First Bank to the new owner. Ironically, Mr. Osgood thwarted an earlier transfer to First Bank in 2010. The key question for the Supervisors is whether the new developer has the financial resources and reputation to complete their obligations to the County.

It’s springtime at Naples, and as we go to press, the property is still legally accessible for public recreational uses. To access Naples, go north on Highway 101, exit at Dos Pueblos Canyon Road and follow the poorly-maintained frontage road under the freeway to the stop sign. Turn left at the stop sign and drive about ¼ mile (back toward Santa Barbara) until just before the 101 southbound onramp, and park to the right on the ample shoulder near the large white gate. There is a pedestrian path to the left of the large white gate. Follow the ranch road (Langtree), leaving any gates as you find them, cautiously crossing the rail road track. Climb the sturdy ranch gate to the south of the rail road track and enjoy the beauty of the Naples mesa. Volunteers are needed to record public use at several locations on the Gaviota Coast – contact Janet Koed at 805-683-6631 to spend part of a day helping save our coast.

In mid-February the County Supervisors sent the Las Varas environmental impact report (EIR) back to Planning Commission for one more review, asking County staff to prepare findings for both approval and denial, depending on the Planning Commission’s action. This project is a complex subdivision of an 1800-acre ranch to facilitate increased coastal development. In their 2014 review of the project, the Planning Commission found the EIR inadequate in the areas of visual resources, agricultural resources, biological resources, cultural resources, land use, recreation and growth inducing impacts. At the Board hearing last month, County planning staff defended their EIR, highlighting the conflict between the Planning Commission and County staff on numerous issues. Although the project includes easements for several trail corridors, these are improperly sited and offer no real public benefits.  The proposed project would create a “freeway” coastal trail bounded by a 6 foot high chain link fence topped with 3 strands of barbed wire, would harm productive agriculture, would forever alter a highly scenic historical landscape and would induce future growth on and off the Ranch, and is at odds with a number of fundamental Local Coastal Plan policies. There was extraordinary public participation before the Board of Supervisors, which will be important to repeat to encourage the Planning Commission to deny this ill-conceived project.