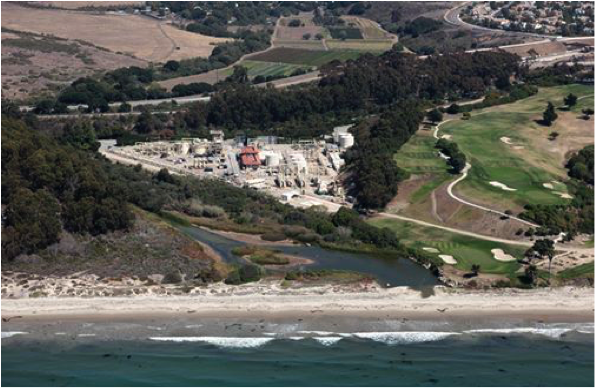 Venoco's declaration of filing for Chapter 11 bankruptcy and returning of three offshore state leases back to the State of California is great news for the Gaviota Coast! Since their leases include Platform Holly and wells drilled at the beach at Ellwood, this is also a welcome development to neighbors in the City of Goleta.

“After a century of oil operations on this precious part of the California coast, today’s actions will lead to removal of three dangerous and visually intrusive oil and gas production facilities, restoration of degraded habitats, expanded public access, protection of Chumash cultural resources, and expanded sustainable agricultural activities that have defined the rural character of Gaviota for over 150 years,” said Brown. “We applaud the decades-long work of the Environmental Defense Center, the Sierra Club, Get Oil Out and Citizens Planning Association to fight the expansion of oil production on the Gaviota Coast and offshore in the Santa Barbara Channel. Their steadfastness, and Venoco’s quitclaim, turns a new page in history of this part of California.”

The Gaviota Coast Conservancy has advocated for the elimination of industrial activities on the Gaviota Coast, including oil and gas development and processing, as well as solid waste management. The shutdown, removal, and remediation of Venoco’s onshore facilities opens new opportunities for public use of a portion of the Coast that has been off limits for more than half a century.

“Venoco’s Ellwood processing facility has posed an unacceptable risk to Goleta residents and visitors alike for decades,” commented Phil McKenna, former President of the Conservancy. “Now we have the prospect of creating a new gateway to the Gaviota Coast that could be an educational, recreational, and cultural resource for all.”

“While the termination of Venoco’s operations in state waters is an important and positive development, the federal Department of Interior has signaled it may seek to reopen the Santa Barbara Channel and other areas to new federal leasing for oil drilling. The Conservancy and our environmental colleagues will maintain our vigilance over the Gaviota Coast and forcefully oppose any such proposals,” explained Mr. Brown.