Geology Investigation on the Gaviota Coast 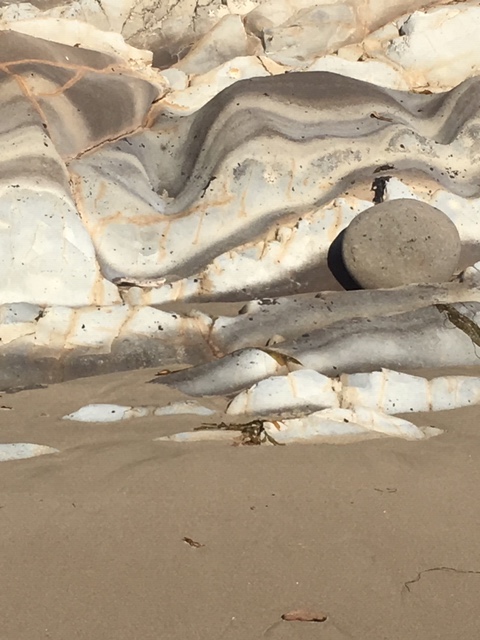 A Work of Art or Ancient History?

A Conversation between Janet Koed and Susie Bartz

Janet: When I saw this formation on a Gaviota beach stroll, I saw an amazing sculpture created by the great Mother Nature, a gift for anyone passing by who happened to look up. Then I became curious to know how the Wizard Mother’s work might be explained in scientific terms. Because I had been on a beach walk with Suzie Bartz and knew her to be a geology buff, I sent the photo to her for interpretation.

Susie: In the photo, we’re seeing the rich variety of layered sedimentary rock in the Monterey Formation. Those are the wavy white and dark gray layers of the background.  Into this is nestled a perfectly rounded rock, in contrast to the linear design of the Monterey rock behind it.

Geologically speaking, the multi-colored Monterey layers in your photo show three features (folding, faulting, and fracturing) caused by the stresses of tectonic compression acting in our region.  The S-shaped fold is called a drag fold, formed when the rock was deformed from its original shape as a stack of flat layers. A nifty little fault rising up from the bottom and leaning toward the upper left corner, may provide a slippage plane on which the fold is riding.  And the very faint rusty lines probably are tiny fractures filled with iron.

In contrast to the contorted Monterey rock layers, the rounded rock probably came from the sandstone cliffs of the mountains, carried in storms down a creek to the beach. Here the sandstone would have gotten rolled about and abraded to a beautiful smooth shape by the surf, contributing loosened sand grains in the process. It’s this erosion of sandstone, mostly from our mountains, that supplies the sand of our beaches.

Quite a story in a picture. As they say, one picture is worth a thousand words! Thank you for sending this one. ~ Suzie

Janet: I had to know more so I asked Suzie to give me an estimated timeline regarding Monterey Formations

The Monterey Formation is a sedimentary marine organic mudstone (aka shale). It collected from gazillions of microscopic marine organisms, whose bodies died and fell into the ocean basins off the west coast from about 20 million to 6 million years ago (Miocene age).  It’s found in the sea cliffs, with a lot of it along our central coast. Much of it is also found inland along the ridges of some higher mountains, like Little Pine and Zaca Ridge, Hurricane Deck, and others.

This whole area was underwater until the San Andreas action began to affect us, about 18 million years ago. The resulting and ongoing compression has deformed the coastal borderland, including the offshore continental shelf, and has pushed it up.

out of the water and up to thousands of feet high. This tectonic compression formed our Santa Ynez Mountains including the Coldwater and Gaviota Sandstone cliffs that supplied your pretty little rounded rock (50-60 million years old) as well as the uplifted Monterey mudstones that form the sea cliff. ~ Suzie

Janet: I wish to thank Susie Bartz and Mother Nature for this story.

Now, can anyone give me your interpretation of this one?  I call her Pangolini. 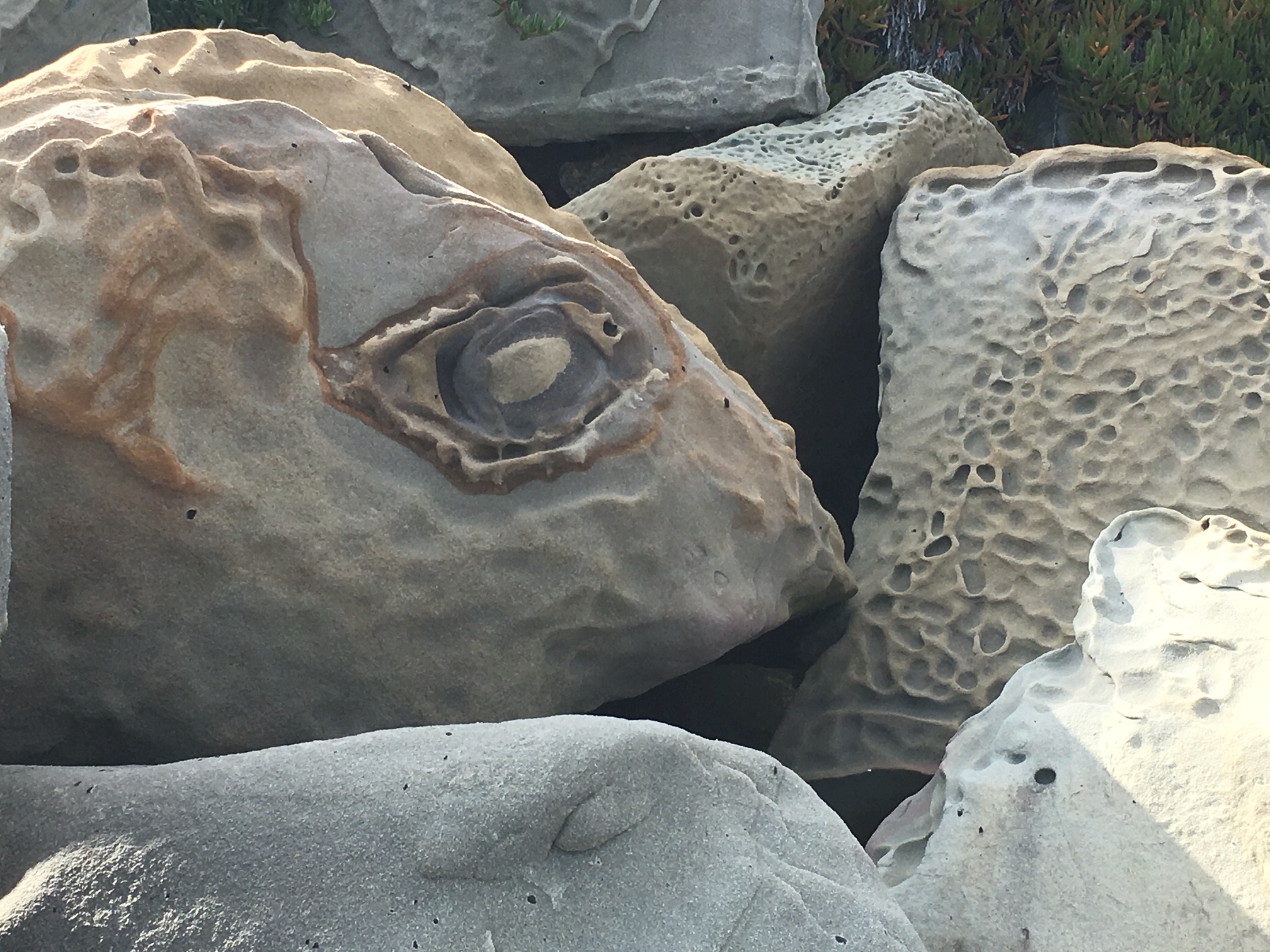