The Gaviota Coast's unique biological richness is produced by overlapping ranges of northern and southern biota, supported by a mosaic of varied habitats created by a complex geologic history. The majestic south-facing slopes of the Santa Ynez Mountains 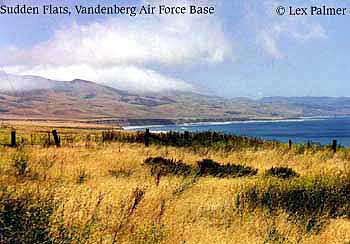 pour down about 400 feet above sea level to the beaches below. These beaches are usually rocky and narrow except where dune systems occur (such as at Coal Oil Point). At several locations, the contact of freshwater streams and seawater forms estuaries with salt marsh habitats such as at Devereux Slough. The coastal terraces, plains, and foothills form a mosaic of grassland, shrubland, and woodland.

Agricultural and urban land uses combine along the relatively narrow strip of gentle topography between the ocean bluffs and the steep rocky outcrops of the Santa Ynez Mountains and account for an appreciable amount of the land cover. Uncommon within the grasslands of the coastal mesas are relict patches of Vernal Pool communities and Native Grasslands. Above the coastal plain and foothills, generally on steeper slopes, is Chaparral, which varies considerably from site to site depending on topography, soils, and disturbance history. At still higher elevations in the Santa Ynez Mountains, i.e. along the crest where annual rainfall averages over 40 inches, forest communities are present. Many creeks flow southward down the steep slopes of the Santa Ynez Mountains, typically cutting deep canyons where vegetation development can be lush, with Riparian Woodlands of large sycamores, willows, cottonwoods, alders and live oaks especially along the perennial creeks.

Some of the land animals to be found along the Gaviota Coast include mountain lions, black bears, golden eagles, southern alligator lizards, burrowing owls (rare but regular winter visitors to the grasslands), and California newts (found in the upper reaches of drainages in the Santa Ynez Mountains). The Gaviota Coast also supports such endangered land animals as the extremely rare California Condor, the California Brown Pelican, the Southwestern Pond Turtle, the California Least Tern, and the California Red-legged Frog (an uncommon resident of south coast streams).

These mountainous watersheds connect the land to the sea. Consequently, the health of the marine ecosystem is inevitably linked to the condition of the land and its human uses. For more information on the Gaviota Coast's terrestrial resources, contact the Santa Barbara Natural History Museum.