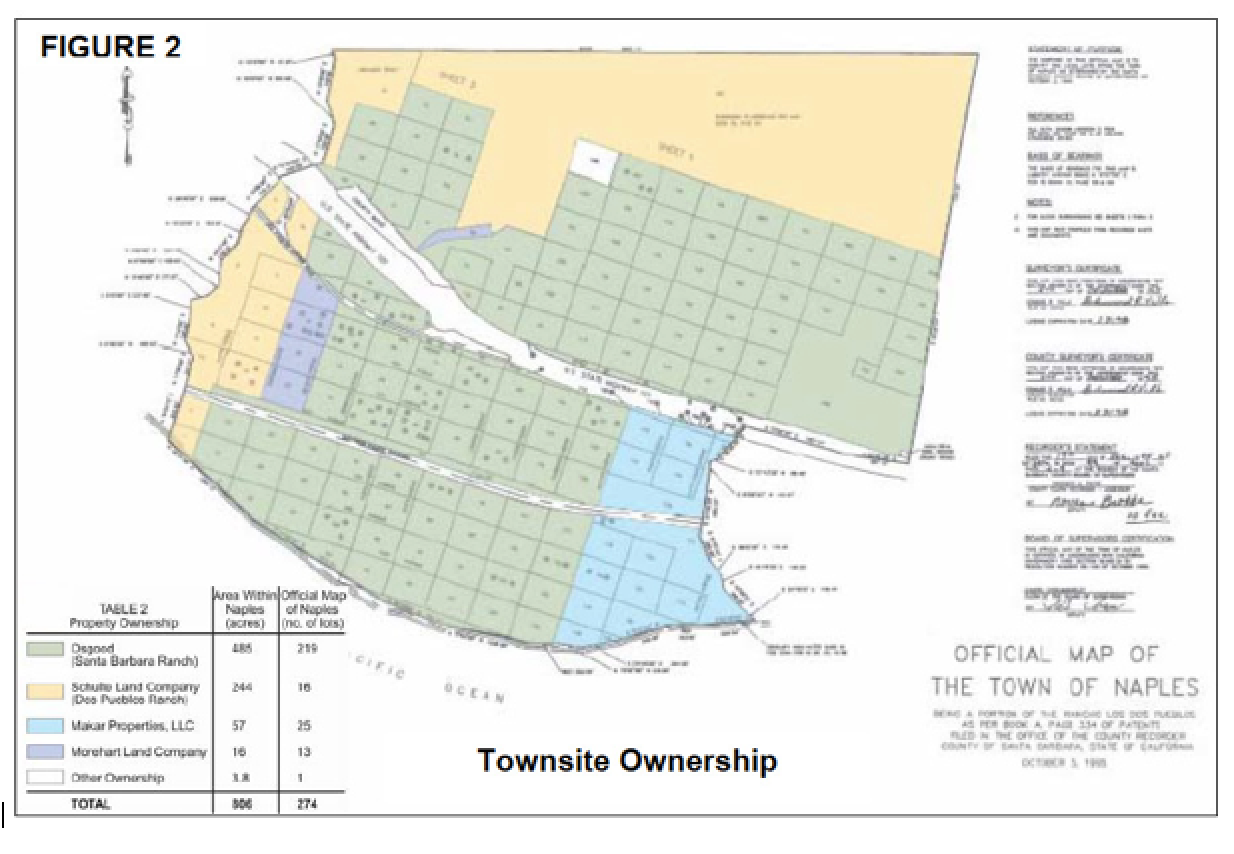 Today there are two active development proposals on the historic Naples townsite.

Between Paradiso’s two lots and the Santa Barbara Ranch project, lie 57 acres with 25 substandard “Naples Townsite” lots. Owned by the Paradiso developers and formerly the western end of the Arco-Dos Pueblos Golf Course, the lands are bounded by Cañada Tomate and the Paradiso project to the east, Highway 101 to the north, the Santa Barbara Ranch fence line to the west, and the Pacific Ocean to the south. Developers propose to build seven large houses on these lands – four between the ocean and the railroad, and three between the railroad and Highway 101. These former oilfield lands have high quality habitat that includes wetlands, native grasslands, white-tailed kites and grasshopper sparrows. The entire site is visually prominent when you are traveling along Highway 101 and the railroad.

The CBAR (Central Board of Architectural Review) conceptually reviewed the developer’s preliminary designs for the seven proposed homes earlier this year. If you drive by the site, you’ll see that the developer is currently drilling shallow wells to test septic system suitability. The project’s full development application is expected to be submitted to the County in early 2017. It will be a two- to three-year process that will include preparation of an EIR, a public comment period, and County processing of permits through the Planning Commission, Board of Supervisors and Coastal Commission. Gaviota Coast Conservancy and its ally, Surfrider Foundation, will scrutinize every detail of this project at every step of the way to prevent inappropriate development in this sensitive coastal area.

The public does not currently have a legal right to go onto these lands, but can view them from the Santa Barbara Ranch fence line (to get there, park on Dos Pueblos Canyon Road by the southbound 101 on-ramp and follow the trail around the gate and onto Langtry Avenue and over the railroad tracks, then veer left/east toward the fence line) or from the Seals Trail).

In another part of the Naples Townsite, a different developer is proposing development on lot numbers 66 and 69, relying on the 2008 Santa Barbara Ranch project preliminary approval that has not been finalized by the County or reviewed by the Coastal Commission. The developer has proposed to build two large homes on a bluff-top lot and a lot north of the railroad. This application remains incomplete, and will likely need an EIR before any development can be considered.

If you are interested in visiting the Naples area, the public can legally access Santa Barbara Ranch, with the exception of lots 66 and 69, by parking on Dos Pueblos Canyon Road by the southbound 101 on-ramp and following the trail around the gate and onto Langtry Ave. and over the railroad tracks down to the beach. The Seals trail also offers access from the fence along the southbound side of the freeway, across the railroad and west to the beach access path. Views of the Paradiso property are available from both Langtry Ave. and the Seals Trail, but the public cannot legally access the property itself.