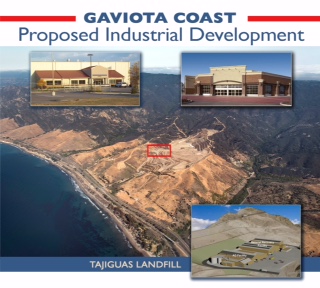 On Tuesday, 4/5/2016, the Santa Barbara County Board of Supervisors voted unanimously to direct the Public Works Department to proceed with the risky (and mis-named) Tajiguas Resource Recovery Project, to be constructed with public funds. Use of public financing shifts the considerable risk of project failure to the County and public, instead of private investors, as originally planned.  The cost is projected to be at least $110 million, making it one of the most expensive capital projects undertaken by the County.

Gaviota Coast Conservancy opposes the Project as inappropriate industrial development on the Coast, and because the EIR admits that the output from the anaerobic digestion process will be contaminated and result in poor quality compost that cannot be used by agriculturalists. The Conservancy believes traditional composting is a better approach that can generate high quality compost useful in carbon farming on the Gaviota Coast.  The Gaviota Coast Conservancy's legal counsel sent a detailed letter to the SB County Board of Supervisors on April 1st, detailing the many Project flaws. GCC joins in those concerns expressed in a letter sent by Community Environmental Council regarding the County Resource Recovery Project.

A final decision is projected for later this year.  The Board has tentatively scheduled approval hearings for July 12, which will be followed by hearings for all participating cities, and then a final Board hearing in October.