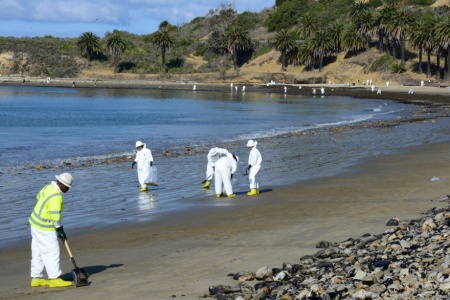 The worldwide slump in crude oil and natural gas prices and the major Plains Pipeline leak and spill near Refugio State Beach last May continue to roil energy operations on and offshore along the Gaviota Coast in multiple ways. The final report from the federal agency charged with maintaining pipeline safety and proper operations (Pipeline and Hazardous Materials Safety Agency or PHMSA) issued findings late this winter indicating that the Plains Pipeline had:

Because of questions about the reliability of automated in-pipe mechanical inspections, all the Pipeline components must be re-examined using different tools and techniques, before any normal operations can be resumed by Plains. No estimate was offered about when new pipeline transport could resume.

This PHMSA report gives extra credibility to several proposed improvements to pipeline inspection and safety now making their way through Congress, including an important one co-sponsored by Lois Capps. As the American Petroleum Institute remains opposed to any changes in inspection-regulation rules, the fate of the bills is uncertain during the current session.

The report findings do not directly affect other inquiries, such as the criminal investigation and civil action now ongoing.

Exxon is processing a permit application to truck a minimum "essential" amount of oil from its offshore platform that ordinarily would go through the Plains Pipeline, to clear its lines and draw down its storage holding tanks, which are now near maximum capacity. If approved by the County (and several state agencies), this would necessitate the use of extra-large oil trucks, making many multiple trips over at least one month's time, along the 101 on the Gaviota Coast.

The combination of the Plains Pipeline total shutdown and a depressed world oil and gas price have badly crippled income for Venoco over the past year. As a result, Venoco filed for federal bankruptcy protection in March. It should be clearly understood that this is not a bankruptcy process in which Venoco would permanently close operations, but rather one where it "reorganizes its operations and refinances its corporate debt."

Venoco borrowed significant sums of money in the prior decade when interest rates were relatively high, and with low revenue from Platform Holly on the Gaviota Coast due to the Plains Pipeline shutdown, plus the huge drop in world oil and gas prices, Venoco was challenged to service its existing debt.

As a probable condition of refinancing Venoco's debt, and reducing interest (and/or principal) on existing money owed, expect to see representatives of Venoco's major lenders assume a much larger role in Venoco's operations, until the bankruptcy is discharged, and the debt service has been paid down. How such changes to management or the corporate board might play out this year is unclear.

Because of a desire for additional revenue, Venoco's extended reach application to extract more oil or gas from the Santa Barbara Channel along the Gaviota Coast from Platform Holly continues to go before the California State Land Commission's three-person board, and whether Venoco's financial ills - or this year's election year stresses - affect the application's prospects remain unclear. The Gaviota Coast Conservancy is carefully monitoring Venoco's proposal for new energy operations in state waters off the Gaviota Coast.

Venoco is suing Plains All American Pipeline for $12.4 million in lost earnings.

Concurrently, the City of Goleta, as part of their first Local Coastal Plan and Zoning Code, have been evaluating Venoco's Ellwood Terminal (an inherited "nonconforming land use" from Santa Barbara County when Goleta incorporated), to ascertain whether they want to allow Venoco to continue Ellwood terminal operations under the new LCP and Zoning Code. To become better informed, Goleta City Council authorized consultants Baker & O'Brien to update a much earlier County study which tried to decide when Venoco's investment at Ellwood terminal would be fully amortized.

In fall of 2014, the study was welcomed by GCC and many other Goleta civic and conservation groups, if only to obtain more reliable and up-to-date information on Ellwood terminal's status. Goleta's original intent was for the Baker & O'Brien update-study to be completed in February of... 2015. But when there was no news from the City about the findings of the study by last fall (a year after it was initiated), many community groups began to press the City of Goleta to publicly release the new study's findings. That finally happened in mid-March 2016.

The updated Baker & O'Brien study indicates that Venoco had fully amortized their original investment at Ellwood Terminal some time between 2006-2008, which suggests that there are no orginal costs left for Venoco to recoup there.

Goleta City Council has yet to schedule new hearings to specifically offer their staff "guidance" on whether they want to retain Venoco operations at Ellwood terminal under the new LCP and Zoning Code; on whether such operations might be designated as "an acceptable use", "a nonconforming use" or an "unacceptable use". The latter, if it were made a legal finding, could necessitate Venoco to present a bonded plan to expeditiously begin an Ellwood Terminal "retirement" or shut-down plan, with attendant timelines, estimated costs, and a suite of "viable alternatives".

At present, there is no hint regarding which direction Goleta City Council might be leaning, nor even whether a final decision will be made before this fall's municipal elections.

The status of the project - which GCC, like many area conservation groups, opposes - is undecided.

SLO County has set no firm timetable for a "final" decision. Given the exceptional level of public interest and controversy, experts predict that an appeal is a foregone conclusion, no matter how the issue is decided, and that litigation [by whichever side loses] is a real possibility. Because of the low world price for oil and gas, Phillips initial sense of urgency to process the application is somewhat reduced.